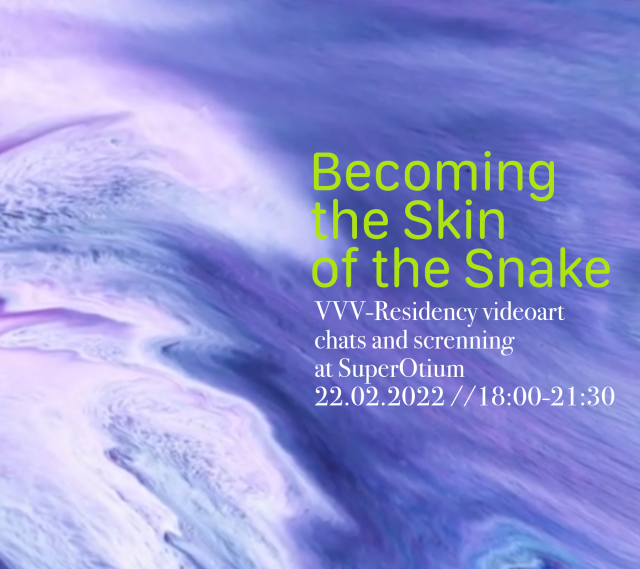 As Ex-voto we are running, within Vegapunk curating project, this residency together with our super colleagues of VisualcontainerTv. The output of this year has been the exhibition and talk Becoming the skin of the snake. Here we are presenting an article written by VVV-R curators: Alessandra Arnò e Simona Da Pozzo.

Experimental perspectives on videoart: a residency.

We are very excited about the evolution of the VVV-R residency project, especially with this new episode, finally live in Naples. But let’s proceed in order: what is vvv-r?

VVV-R project is a Videoart Residency project by Visualcontainer and Vegapunk, both based in Italy. The VVV-R residency, to which the artists attending AUB have a dedicated annual episode, is a space for research and sharing processes of creation that investigates visions of the world through video art.

Four to five artists in residency engage with different digital tools: a blog, webinar platform, digital and physical archives, a streaming platform.
A specially dedicated online blog, is the space on which artists intervene through posts sharing with other artists and tutors the work in progress of their work. It’s a kind of shared diary of images enlightening the visual link between the researches.

The residency is finalized to the realization of video works that are annually presented in the frame of the online exhibition running in streaming on video art international platform VisualcontainerTv for one month.

The residency focusses on the video-trouvé as a tool to look at one’s own research through the eyes of others: a topic to face nowadays to explore how human interaction and perception of reality is continuously glitching within screen interfaces.

Part of the process is the awareness of historical and collective visual memories as a point for sharing new perspectives mixing historical moving images archives and free video libraries. Working on the collective imaginary allows redefining the border of collective perspectives and opens to new significance and perceptions of reality.

Nowadays, historical and artistic archives and video libraries are available on the web as a fruitful pool to source video content to manage storytelling.

The editing of found footage now is the first approach to understanding and awareness of the experimental video art languages where artists remix imaginary and significant.

The residency is a protected sphere for research where the relationships between the artists are set horizontally, whether they are students, professors, tutors, emerging or established artists. This horizontality is sought at all stages: from the research stage, to the moment of production, from the presentation to the public to the moment of confrontation at the round table. This micro-utopia of a space free from hierarchies of value, power and knowledge is the way in which the curators attempt to create an environment in which the artists can imagine or redesign new types of relationships with art and the world through their works.

The first of the human virtual spaces is in fact that of conversation: things that happen on the formative level of the word, of the tale.

Every conversation is a landing place for the contamination of curiosities that lead elsewhere, to other places or works. Looking at conversation as a moment of production of locality, where the locality defines a common background for making things, processing words and works, the round table in a real life space is the fluid conclusion of the whole process. The moment of exchange in Naples in 2022, through new meetings and conversations, created a new temporary locality where new connections, new thoughts, curiosities and works for both the artists in residence and the guest artists.

In 2021 and 2022 the artists in residency has been commissioned by Arts University Bournemouth in the frame of Global Networks program curated By Richard Waring.

Their research and conversations resulted in two different exhibitions, which titles are the result of the curatorial path that evolved during the final step of the residency. The exhibitions have a duration of one month online on VisualcontainerTv.

Digital Glue (2021) emphasizes the connective aspect of the web and the action of turning other people’s images into one’s own voice.

The research range through the re-editing of artistic footage and the mixing of daily web footage in a new collective perspective.

Becoming the Skin of the Snake (2022) makes reference to what snakes  left when changing their skin: their dry skin can be seen as an objet-trouvé, as an empathic tool for relating to others and to the environment.

Despite two specific exhibitions, the artists developed various themes and lines of research crossing the time-boundaries of the e two residencies.

On the one hand, some of the artists focused their experimentation on the perceptive and psychological aspects of the video, making often reference to bio-scientific and human science domains, as in the case of the artworks by Amie Dodgson, Evelyn Zhou, Tilly Collins and Clara Begliardi Ghidini.

Within Sens, which in Latin means ‘to feel’, Amie Dodgson questions ‘how can a sense other than visual be explored through video and found footage to create a narrative?’ The research began with haptic vision using colorful abstract movements to create a synesthetic experience. Combining silences and diegetic sounds, the artist makes a play between attention and focus, meaning and interpretation which in turn creates a second narrative towards what the viewer is watching.

The perception of time is the focus of Evelyn Zhou work. In her video Time flows between cities and nature, from day till night. Colors and shapes draw a continuity between situations and environments in the frame, emphasizing the difference in rhythms and relationships with time. When everything comes back to darkness the sounds display only the time of Nature.

Tilly Collins‘ work deals with the sense of time too. She plays within the art world re-editing Bruce Nauman’s ‘Good Boy Bad Boy’ (1985) together with stock footage clips. The repetition is the key she uses to emphasize the experience of boredom. Highlighting repetition, She makes the video raise questions around how we spend time and on our sense of productivity, which directly relates to how the viewer is spending it watching this piece.

Numb reflects Clara Begliardi Ghidini‘s interest in psychological anthropology and biology. She deals with art legacy, editing Len Lye’s Tusalava animation (1929) to examine the hypothetical metaphor between enzyme function and the way we cope with our emotions as human beings.

On the other hand, some of the artists started from the socio-political issues they wanted to bring out in order to elaborate both the creative process and the final work, as in the case of the works by Annabel Miller, Lisa Moro, Eve Williams, Eleanor Banfield and Dasha Konovalova.

Annabel Miller’s work explores the hidden curiosity of the peep hole and how the female body is often looked at through one end of this hole. In Performing Holes, she eliminates any form of sexual nature from the images and shows the subjectification of bodies as the narrative of performance. The mouths become the eye, speaking to the audience and creating a loop between the viewer, the watcher and performer: a watching loophole.

Invasion Fertilisation results from Lisa Moro’s research into the international commercial fertility and surrogacy market. The piece is set in Ukraine, one of the largest commercial surrogacy markets, using public webcam footage in the last few days as Russian invasion is imminent. The artist makes reference to microscopic and telescopic views, making a parallel between cells and territory:  two spaces of invasion making reference to raping as a war occupation tactic.

Eleanor Banfield shares within Galaxian Green her contradictory feelings born from the mix between her vegan position and her nostalgia:  She created an Ormer character and made it aesthetically pleasing using the sci-fi and gaming connections to create a friendly and nostalgic feeling to allow the audience to become more attached and sympathetic towards the Ormer before the video descends into the chaotic and violent reality of the shellfish.

Eve Williams explored the associations between human communication systems and the tree’s micellar net. Using Peter Wohelleben’s The Hidden Life of Trees (2015) as a reference point, She represented the connectivity using screenshots from Google Earth, bringing into question ideas surrounding surveillance and the power of the observer. The patterns and recurring shapes emerge from the footage as the video Connect proceeds illustrating similarities between human and vegetal intelligence.

Glasnost focuses on the struggle of overcoming an oppressive regime, the effects it can have on someone’s psyche and the psychology of whole nations generations after its fall. Dasha Konovalova stresses the repetitiveness of sounds and imagery of the film to give emphasis to the feelings of betrayal, anger and sadness. By doing so, she ri-elaborates, both personally and historically, Adonis XIV, a film by Baki Sadykov. It is from a collection of videos made in the beginning of the “Glasnost Era”, 1986-1988. The film features a white goat who leads animals to slaughter for some sugar cubes from humans.

On february 22nd, 2022 we had the pleasure to present the complexity of those visions in the frame of an event at SuperOtium in Naples.

Before the looped video projection of the nine works, we explored with our guests the different ways in which the artists’ research relates to video, both as a tool and as a work.

The round table was a moment of encounter between the people present, their artistic practices and the use of video in their own research: a space to engage in reflections that evolved throughout the evening in face-to-face conversations between the AUB artists and a number of artists and curators based in Naples. In particular the conversations have been guided by: Collettivo Damp, Evelyn Yulin Zhou, Roxy in the Box, Lisa Moro, Annabel Miller, Antonio Mastrogiacomo, Guido Acampa, Clara Begliardi Ghidini, Tilly Collins, Moio&Sivelli, Simona Da Pozzo, Alessandra Arnò and Richard Waring.